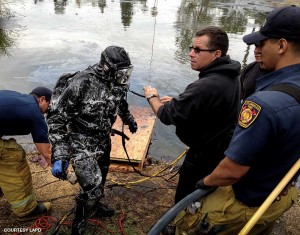 Sgt. David Mascarenas emerges from one of the strangest and most dangerous evidence retrievals in the history of police diving — the search for a modern-day murder weapon in a prehistoric graveyard known as the La Brea Tar Pits.

Sgt. David Mascarenas was stewing in his own sweat inside a Whites hazmat drysuit. It was a sunny day in Southern California in June 2013, but it wasn’t just the heat that was bothering him. Mascarenas, dive supervisor of the Underwater Dive Unit of the Los Angeles Police Department (LAPD), was about to lower himself into one of the most dangerous and unusual criminal evidence scenes ever entered by a police diver: the La Brea Tar Pits.

The tar pits were a bubbling cesspool of primordial ooze and a death trap for creatures such as wooly mammoths and saber-toothed cats; they had even held the 9,000-year-old skeletal remains of a human. Today they are a popular tourist attraction on the midtown stretch of Los Angeles’ famous Wilshire Boulevard but also, the cops believed, the possible location of a modern-day murder weapon and other critical evidence in a high-profile case.

Mascarenas has an adventurous spirit. He was born in the backseat of his father’s car as it sped down Hollywood Freeway toward the hospital. He had been a soldier in the Army and had done just about every job in the LAPD from the gang unit to bike patrol. But diving into the quicksand clutches of viscous green sludge and methane gas that killed creatures 20 times his size? That was madness, and he knew it before he took the plunge.

“I thought I wasn’t going to make it — that I would get stuck and they wouldn’t be able to pull me out,” Mascarenas said. “I actually got so stuck twice that they did have to pull me out. They had to pull so hard that I thought my ribs were breaking.” The gas was even more dangerous than the sludge. “I had my ambient air valve open, and the methane got in,” he continued. “I had to immediately close it because I became light headed and nauseous.”

But he also knew he couldn’t quit. If he succeeded he might help get a murderer off the streets.

For two weeks he and his colleagues had planned and prepared for this moment, but most of that was turned upside down when he entered the water. His planned seven-minute dive became a 77-minute dive, and he descended to more than double the 8-foot maximum depth; his depth gauge failed at 17 feet.

* * *
To those who steal, smuggle, rape or murder, a body of water may look like a silent accomplice, an irresistible place to ditch a weapon or a body. Once it sinks beneath the surface, they might believe, so too does their chance of being caught. Until very recently they were probably right.

But advances in scuba, sonar and other marine technologies, along with an evolution in thinking about the role of police divers — from glorified evidence retrievers to fully trained underwater investigators — have given law enforcement the tools and skills to pursue justice wherever it may lead, even into ancient tar pits.

Police divers have extended the reach of justice. Take the story of Stephen Griffiths, the self-described “Crossbow Cannibal,” a 40-year-old psychopath convicted of killing three women in Bradford, England, from 2009 to 2010, shooting one in the head with a crossbow bolt as she tried to escape his apartment. He dismembered his victims in his bathtub and claimed to have eaten portions of all three.

After 81 body parts were found in the River Aire near Griffiths’ home, a follow-up search by West Yorkshire Police divers turned up a black canvas flight bag filled with knives, hacksaws, razor blades and a small section of human spine. The discovery helped connect Griffiths to the murders, and he was sentenced to life in prison.

In addition to violent crimes, police divers also help stop drug smuggling, participate in anti-terrorism operations, recover abandoned vehicles and even document criminal negligence. A recent case in which law-enforcement divers played an important role is that of the cruise ship Costa Concordia. When its captain tried to perform a show-off maneuver off the coast of Giglio Island, Italy, in January 2012, he instead partially capsized it on a reef, killing 32 people. In the search, recovery and salvage operations that followed, a Spanish salvage diver died when a heavy piece of metal that was cut off the ship fell on him — a visceral example of the hazards police and other professional divers face in doing their jobs. 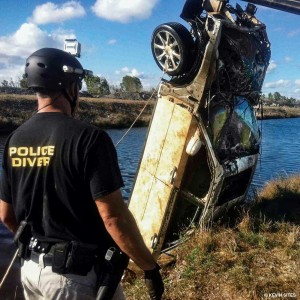 The man considered to be the godfather of modern police diving, Michael Berry, is a humble 57-year-old from Killeen, Texas. A longtime veteran of the Virginia State Police and the operations commander of its search and recovery team, Berry is the author of The Water’s Edge: A Manual for the Underwater Criminal Investigator. Many police organizations credit Berry’s book and his company, Underwater Criminal Investigators, with helping to identify and standardize the unique skill set that has been used to train a new and more effective generation of police divers worldwide.

The Water’s Edge highlights one of the most unpleasant parts of the police diver’s job: the recovery of bodies, often unrecognizable because of accelerated decomposition. Berry’s strong stomach and sense of empathy set him apart. “I’ve lost count of how many (bodies) I’ve recovered in my career,” he said during a break in one of his training sessions. “It never bothers me, I never have nightmares. I pray beforehand: ‘Lord please help me find them, keep me safe, and let me bring some closure to this.'”

When Berry finds the body of a victim, he says he stops for a moment and speaks to it before bringing it to the surface.

Berry has more than a thousand underwater criminal investigations under his dive belt, and while they all carried risk, one almost killed him.

On a recovery dive in a quarry in Culpeper, Va., in 1989, Berry swam into something that didn’t feel right. Even with his regulator in his mouth, he said he could tell the water was contaminated.

An hour after he got out of the water Berry had a throbbing headache. He developed a kind of meningitis that left him bedridden for almost two months. When he finally recovered he used his own experience to help ensure the safety of others, pushing his Virginia State Police bosses to fund full-face masks and underwater communications systems for every member of his team.

“My department started to listen to me after that,” Berry said. “Everything changed, including my attitude. No more dog-getting-a-bone — let’s become underwater criminal investigators.” The event earned the dive team the respect of detectives who never left dry land. 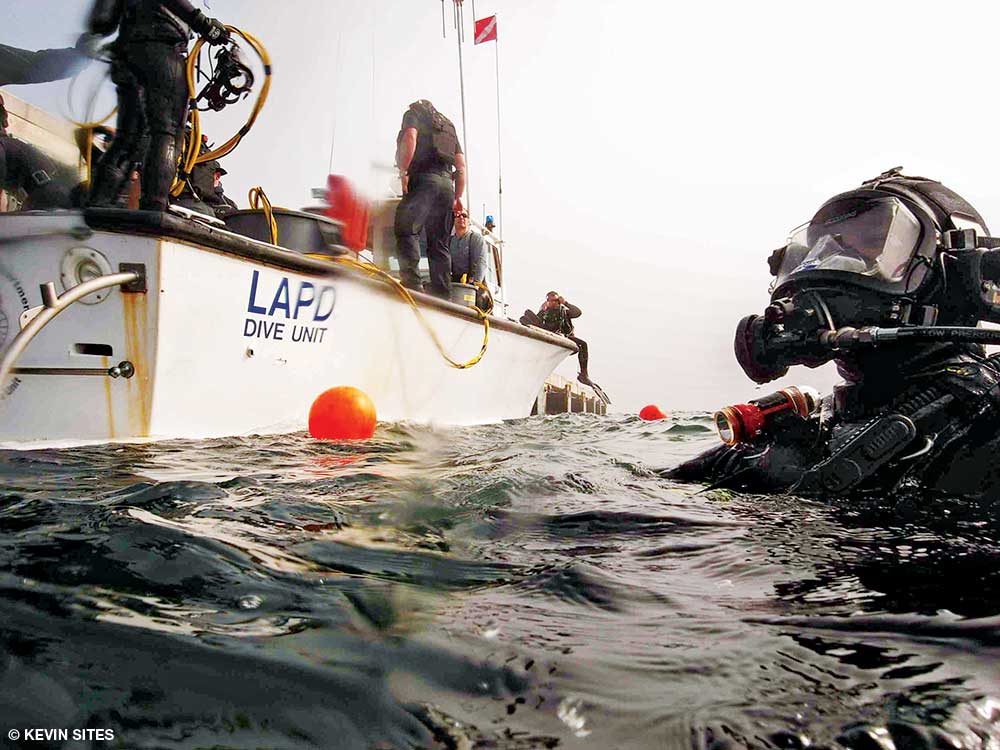 Like most police dive units, LAPD’s Underwater Dive Unit started out in an unofficial capacity, comprised of officers with scuba certifications and little other training. Today it has a well-stocked mobile command center.

Back at the tar pits, gathered along with the LAPD’s Underwater Dive Unit were members of the LA Fire Department, LA Port Police and Long Beach Police as well as geological scientists, diving experts and even representatives from equipment manufacturers.

“I asked all the experts on site if it would be possible to actually dive the tar pits,” Mascarenas said, “but all said no, the equipment would not work because of the chemicals, contamination, gasses, temperature, etc. The tar pits emit methane bubbles, which are toxic and flammable. We couldn’t use a remotely operated vehicle (ROV), as each articulation emits a small spark, which could cause an explosion.”

Mascarenas had asked divers from the other agencies and even two of his own team members if they wanted to do the dive. They all declined, so he knew he’d have to go in himself to retrieve possibly crucial evidence in the case.

He geared up in a drysuit, hood, gloves and full-face mask with hard-wired diver-to-surface communications. He would be breathing surface-supplied air, but he also carried his own gas supply, and he was secured with a rope tether in case he got stuck. When he finally submerged near his target search area, he was surprised by the texture and warmth of the liquid. 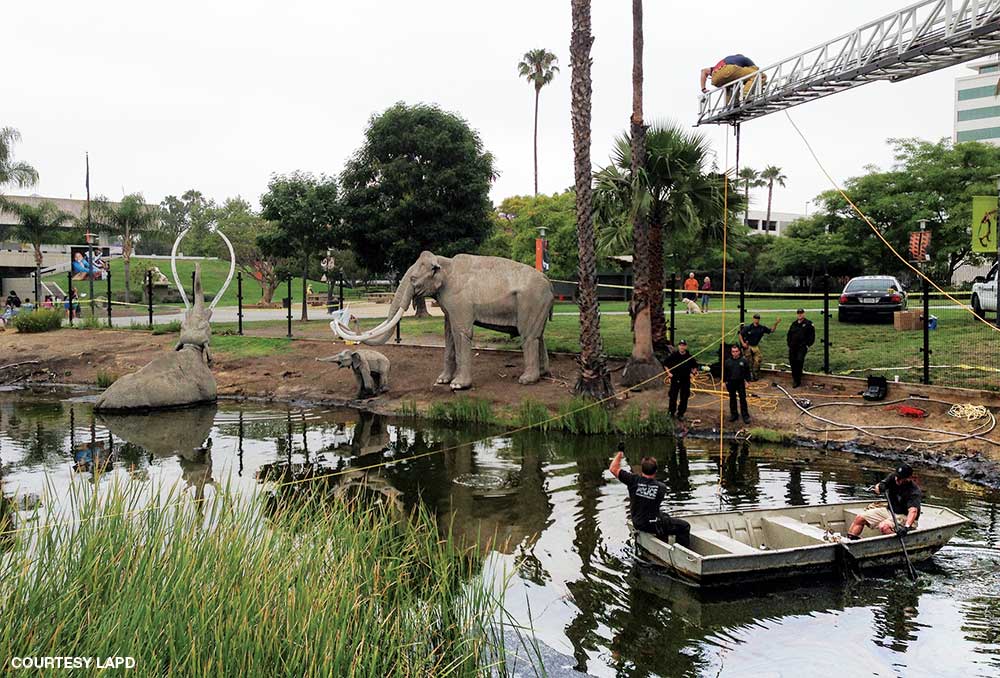 “It was the weirdest consistency I can describe, kind of like pudding — some spots you would touch and instantly get stuck, others you could pat your way through it,” Mascarenas said. “There was no visibility, just a green hue. I could make out a shadow if I passed my hand slowly by my mask.”

He discovered the pits weren’t of a single consistency but rather layers of tar with pockets of water between them. There were also columns of methane gas stretching to the surface. He could fin his way slowly through the water layers, but when he touched a column of methane it would burst, covering his gear and mask with tar.

Despite the obstacles he began searching the area with his hands, finally finding something hard in the goo. Then he found another item. They felt like what the detectives had told him to look for (because the case isn’t closed the LAPD won’t disclose specifically what he found).

“I told the surface team I was bringing some things up, and they had evidence containers ready to receive them,” Mascarenas said. “I was elated. It was like accomplishing something no one else ever has.”

And he was right. While the case is not officially closed, law enforcement officials have suspects in custody. With the evidence that Mascarenas recovered from the tar pits, there’s now a better chance for a conviction and justice being served — from the depths of one of the most formidable liquid environments on the planet.